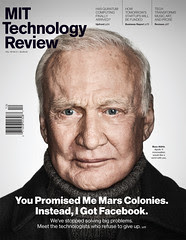 The current issue of Tech Review arrived… and the plaintive plea of Buzz Aldrin is so arresting. Why have we invested in one and not the other?

To be it seems like a surreal disconnect. Innovation is in florid bloom out there, with compounding technologies that warp the very fabric of reality. Big, bold projects to change the world… and beyond. Transportation is becoming electric and fully autonomous. New constellations of low-cost satellites will provide free imagery of every part of the Earth every day. A new wave of industrial and agriculture biotech is upon us as we move beyond cut & paste and freely write the code of life like we program a computer… and the software creates its own hardware. From a few artificial microbes, we can now create billions of novel life forms per day, with all of their DNA spooling from a gene printer. Various breakthroughs in digital non-volatile memory will take us to the post-CMOS era in computing. Humanoid robots will flow into the workforce in 2013 with more powerful AI to follow. Femtosecond lasers can machine materials with zero heat. Quantum computers can now outperform a classical computer by orders of magnitude, and may soon outperform all computers every built for certain optimization calculations and machine learning tasks.

The future is quite bright if you talk to entrepreneurs. The pace of innovation is breathtaking if you talk to scientists, continualy forging the future along the frontiers of the unknown. I hope more investors can look beyond the arbitrage plays rippling throughout the information economy, so easily farmed for their short-term pops, and fleeting sense of bounty. The daily din of opportunism can create a head buzz that crowds out healthier fare.

The pattern of progress comes into focus with a longer-term perspective. We are investing in SpaceX’s trajectory to colonize Mars, to take us where no person has gone before, to venture forth to make humanity a multi-planetary species. And, as I flipped the pages, I was delighted to see that we are investing in almost every “big opportunity” highlighted in the magazine.


So I guess you are not swayed by more Mars colonies less crime arguments. If the film versions are correct we get more crime, dictators and social injustice along with more Mars colonies. But we do not have any historical basis for that as a social science observation unlike my discovery of the more Mosques less crime effect. That was in fact key to saving civilization from that difficult era of Mongol and barbarian lawlessness and social disruption. Of course they did not have the relatively low technology of firearms so any opposing militias were easily dealt with, one more thing which our founding fathers had the wisdom to make sure would not be an issue for us.